Is It The Right Time To Include Gold and Silver Positions In Your Portfolio? You can not help but notice the impressive rally that gold and silver have been on in June and for most of 2016 so far. The safe haven metals have continued to enjoy widespread gains across currency markets. Investors have been hunting for safe haven hideaways as worldwide market uncertainty grew. As a result of this chain of events, gold futures are already up a significant 27% measured against year to date for 2016, while little brother silver prices have roared ahead by 43% over the same time period. Technically, the prices look strong and positively supported on any price dips per the charts. This continues to recommend the metals bullishly for the future. Now might be just the right time to add gold and silver positions to your portfolio before the safe haven metals are going, going, gone. 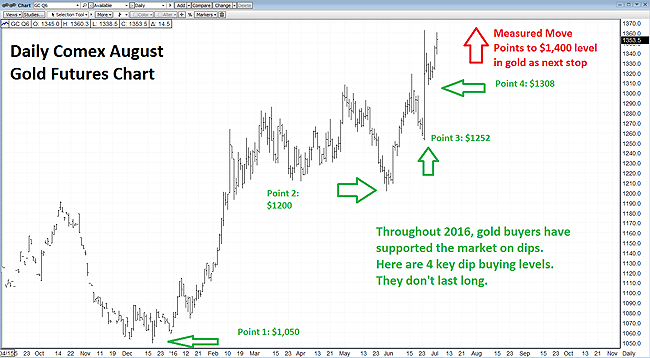 It is more than simply risk aversion driving gold and silver’s latest uptrends. Besides the ongoing fallout from the Brexit vote in Britain, you have dimming expectations of U.S. interest rate increases and a multitude of key players supporting the precious metals prices. This has driven gold higher against a host of currencies, with gold up the most against the pound at +18%, up over 10% against the euro, up 8.5% versus the U.S. dollar, up 8.7% versus the Canadian dollar, and even at +8.6% against fellow safe haven member the Swiss franc.

Gold and silver have undoubtedly reacted positively to the post -financial markets chaos and uncertainty. This is not all that is driving their prices these days. Before the Brexit vote, a U.S. interest rate or two had been anticipated and priced into markets before the end of this year. Now, these once certain expectations have been pulled back to no more than a single interest rate hike in December at best. The Fed Funds rate futures are so low that it is nearly impossible for the Federal Reserve to raise the rates now. The Chicago Mercantile Exchange 30 Day Fed Fund Futures only price in a mere 14% possibility of a single quarter point hike in or by December. Consider that just before the confidence rattling Brexit vote, the probability of this interest rate hike occurring stood around 40%.

Hand in hand with this lack of belief in a U.S. interest rate hike goes the declining investor confidence in the ability of all global central banks to manage the crises. Best selling author of The New Case for Gold  Jim Rickards told CNBC in an interview on Tuesday that the credibility of the U.S. central bank the Fed is “already in shreds” and will probably only worsen as the much-touted interest rate hikes do not happen. This in turn keeps pushing up the precious metals. It begs the question would you wish to purchase U.S. dollars against gold (or any hard asset for that matter) when the Fed lacks the willpower and ability to raise the interest rates as they promised earlier.

Gold is also finding an unusually strong base of key players supporting it and silver these days. In 2016, it has enjoyed the consistent and continuing support of everyone including:

It does not hurt the precious metals that major investment banks have come around to seeing higher precious metals prices for the remainder of this year and even next. HSBC has recently thrown its hat into the ring with the growing group of banks who have hiked up their gold (and silver) forecasts recently. Last week Societe Generale boosted both their gold and silver forecasts for this year and next. This week HSBC says it is “mildly bullish” on the precious metals and sees gold running freely until the $1,400 an ounce levels. They simultaneously increased their average gold prediction for the year to $1,275 from the prior $1,205 while boosting their 2017 price forecast from $1,300 to a $1,310 average price.

More importantly than the price increases is the reasoning behind them. The British banking giant provided three good reasons investors should remain bullish on gold. They expect a stronger Euro which often moves in tandem with gold against the dollar. They continue to look for a weakened outlook from the Federal Reserve on interest rate increases. Finally they continue to see rising ETF funds demand for gold as the ultimate safe haven asset after the British voted to withdraw from the European Union. The ETFs have already proven their loyalty to gold so far this year by purchasing a net 476 tons of the yellow metal, per the HSBC report. They also pointed out that the long gold futures positions at Comex have reached all time highs.

The chart above demonstrates the same argument that the fundamentals are all pointing to these days– the gold market trend is clearly bullish. If you are contemplating opening a physical gold or silver portfolio now or increasing your already existing position, you should not wait much longer vainly hoping for a price pullback. The precious metals dips so far in 2016 have been both mild and brief.